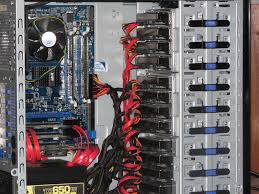 Users of QNAP network-attached storage (NAS) devices are reporting attacks on their systems with the eCh0raix ransomware, also known as QNAPCrypt. The instigators who pushed this  malware increased activity about a week before Christmas, taking control of the devices...

END_OF_DOCUMENT_TOKEN_TO_BE_REPLACED

If you own an Imac chances are it is using a Fusion drive and this article could well be of interest.Apple Inc. launched Fusion Drive – a combination of a solid state and platter-based hard drive aimed to take the best of two worlds, i.e. modern flash and ordinary...

END_OF_DOCUMENT_TOKEN_TO_BE_REPLACED

A solid-state drive is  a device full of flash memory chips. To be able to read and manipulate the data on these chips the operating system needs a way  to arrange the data on a SSD . Data stored on an SSD is divided into blocks of data. These blocks are, in turn,...